Is It Okay to Keep Pets During Pregnancy? 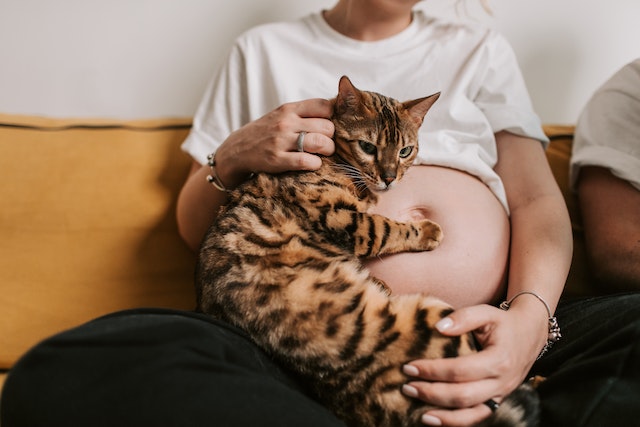 Pregnant women do not have to give up pets, provided that hygiene measures are observed. In addition, it is advisable to prepare the animal for the addition of the family.

The two lines on the pregnancy test not only change the lives of expectant parents; they also turn the everyday life of their pets upside down. With the first pregnancy, many pet owners automatically have all sorts of fears: Do you have to give up the dog now? Is it still allowed to pet strange cats? Will pet hair cause Hamiləlikdə ürəkbulanma və qusma (Nausea and vomiting in pregnancy)? And does the hamster possibly transmit diseases that could harm the unborn child?

Even with a short search query on the net, it is likely to be scary and anxious for many an expectant mother. There is talk of all kinds of bacteria and viruses, of the ominous parrot disease, of meningitis due to guinea pigs, and skin diseases caused by fish. There is hardly a pet, it seems, that cannot potentially harm the pregnant woman or the unborn child.

Hygiene is the be-all and end-all

Barbara Stocker doesn’t think much of the alarmism that sometimes prevails on the Internet and unsettles expectant parents. She should know: The President of the Swiss Midwives Association has rarely encountered health problems in pregnant women due to pet ownership.

Probably the best-known threat is toxoplasmosis, an infection with flu-like symptoms that basically leaves lifelong immunity. If a woman already has antibodies against the pathogen before the start of pregnancy, the unborn baby is also protected. If a pregnant woman becomes infected for the first time, it can lead to a miscarriage or, rarely, to severe malformations in the child. The pathogens can be absorbed mainly by touching the excrement of the cat. Pregnant women should therefore either keep their fingers off the litter box or wear plastic gloves for cleaning, so the often quoted appeal.

ALSO READ: Animals Can Get Diabetes, Too!

“20 years ago, toxoplasmosis was a major topic during pregnancy, and all pregnant women were tested for antibodies,” says Stocker. The cases in which unborn babies actually suffer harm are so rare that antibody tests are only carried out if an acute illness is suspected. The examination is only paid for by the health insurance in these cases. “If you pay attention to hygiene by washing and disinfecting your hands regularly or using gloves when cleaning the litter box, there is hardly any risk from cats for pregnant women,” says Stocker.

Never before has the midwife from Strengelbach AG met a pregnant woman who caught one of the diseases mentioned on the net, which parrots, rodents or aquarium fish can transmit. “These must be extremely rare cases,” she suspects. She, therefore, does not consider it necessary to explicitly point out such rare dangers to pregnant women. “Especially since these cases can also be prevented by adhering to hygiene measures.”

If she noticed during a home visit that hygiene in dealing with a pet is poor or a pregnant woman has, for example, bite marks from the cat or a guinea pig, she would of course address that, says Stocker. In the wake of the corona pandemic, however, women now know more than ever what it means to pay attention to hygiene. And this ultimately applies to all areas, from the prevention of communicable diseases to food preparation. “If you also use common sense when dealing with animal roommates, there is nothing wrong with keeping one or more pets during pregnancy,” says Stocker.

In addition to uncertainties regarding the health risks of pets, Stocker is also occasionally confronted with questions about the behavior and education of dogs and cats during pregnancy or in the puerperium. “Of course, I refer the pregnant woman to specialists,” says Stocker with a laugh, “because I’m not responsible for animals.”

The advice of behavioral veterinarians on how best to prepare pets for the arrival of the newborn is varied: from playing, baby sounds from tape for acoustic preparation, to carrying around stuffed animals as baby dummies, to bringing full diapers from the hospital. However, the most important difference that the pets notice with the new family member is that the master and mistress will then have less time for them. It is important to prepare the animal for this during pregnancy. For example, by declaring the children’s room a taboo zone and getting the dog used to more flexible walking and feeding times.